Microsoft is set to enter into a controversial contract with US Immigration and Customs Enforcement (ICE) and GitHub staff are demanding it’s cancelled.

The contract is worth $200,000 but ICE has repeatedly come under fire from rights campaigners after a string of abuses, including the highly-publicised separation and detention of migrant children from their families. 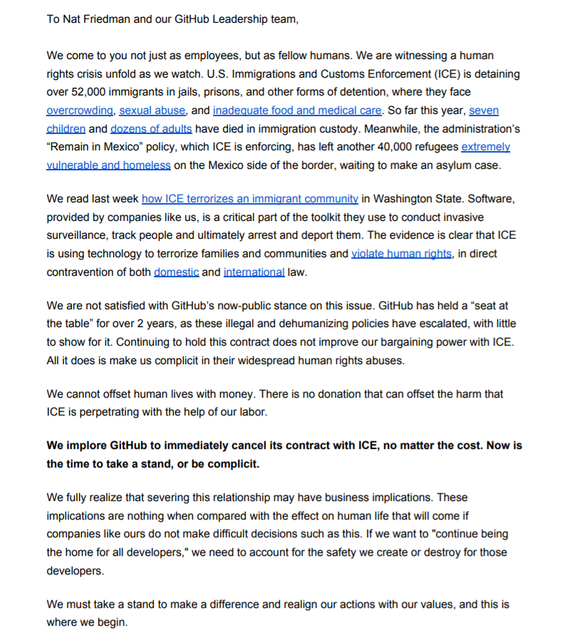 The letter was published a day after GitHub announced a $500,000 donation to nonprofits “working to support immigrant communities targeted by the current administration,” according to an all-staff memo sent by Friedman.

“Attempting to cancel a purchase will not convince the current administration to alter immigration policy,” Friedman wrote in the memo. “Other actions, such as public advocacy, supporting lawsuits, meaningful philanthropy, and leveraging the vast resources of Microsoft will have the greatest likelihood of affecting public policy. Our voice is heard better by policymakers when we have a seat at the table.”

Employees across Microsoft have previously voiced their disagreement with US administration contracts, including with the Pentagon.

In a 2018 memo, Microsoft staffers wrote: “We are part of a growing movement, comprised of many across the industry who recognize the grave responsibility that those creating powerful technology have to ensure what they build is used for good, and not for harm.”

Following Microsoft’s acquisition of GitHub at the end of last year, employees from the world’s largest repository host are taking the opportunity to add their voices to the aforementioned growing movement.