FLORHAM PARK, N.J. — When the New York Jets‘ decision-makers devised their offseason strategy, they focused on ways to improve Sam Darnold. Confident in his talent and growth potential, they sought to build a better cast around him. It was a sound plan: If you have a potential franchise quarterback, give him tools to succeed.

So they gifted him Le’Veon Bell, arguably the best dual-threat running back in the NFL. 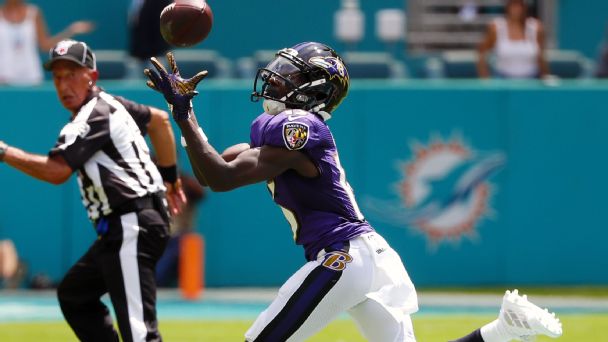 Now it’s on Darnold to galvanize the pieces and make it an “electric” offense, the word he used last week to describe his expectations for the unit.

No, the Jets weren’t electric in Week 1. Truth be told, they blew a fuse in their 17-16 loss to the Buffalo Bills. While Bell and Crowder were impressive in their debuts, accounting for 87% of the yards, the rest of the cast — headed by Darnold — was out of sync and ineffective. The offense produced eight points, same as the defense — not the kind of ratio that will help them Monday night in Week 2 against the Cleveland Browns (0-1).

Suddenly, we have a new dynamic: For the first time in his young career, Darnold is hearing mild criticism from fans and media. His rookie season, despite a few clunkers, was a honeymoon. To paraphrase an old Pat Riley saying, it was the innocent climb. Now there are expectations, fueled by his encouraging finish to 2018, the trendy rise of second-year quarterbacks and the breathless hype from his own organization.

Coach Adam Gase, who said postgame that Darnold has “room for improvement,” backpedaled Monday. He focused his criticism on the wide receivers and offensive line, exonerating (and perhaps protecting) his quarterback.

“After going back and watching it, I feel a lot better about how he performed,” Gase said.

The Jets played as if they wanted to show the world their big-money additions were sound investments. (It should be noted the man who made those decisions, general manager Mike Maccagnan, was fired in May.) Bell and Carolina Panthers star Christian McCaffrey were the only two starting running backs to play every offensive snap Sunday. Crowder was targeted 17 times and caught 14 passes. He and Bell combined for 38 touches out of 66 plays, an astounding ratio.

Meanwhile, Quincy Enunwa was invisible. Robby Anderson was a nonfactor. Ty Montgomery, so impressive in the preseason, was cast aside, filed under “Yesterday’s News.” The offense averaged 1.0 yards per play when the ball went to someone not named Bell or Crowder; when they got it, the average was 5.1.

Moral of the story: It’s nice to have shiny, new toys, but the old ones are important, too.

It’s unfair to blame Darnold for every ill on offense, but the great quarterbacks have the ability to elevate those around them. Darnold had a chance to do it with three minutes left, trailing by a point, but he completed only two of seven passes on the drive and failed to get his team into field goal range.

To celebrate 100 years of pro football, Peyton Manning travels the country to see the people and places that made the NFL the NFL.
Watch on ESPN+ » More »

Darnold looked tentative at times. He was 1-for-6 on tight-window throws and went 0-for-4 on passes of at least 20 yards downfield, according to NFL Next Gen Stats data. He also saw at least five passes batted at the line, often an indication the quarterback is telegraphing his passes. Let’s be clear: He wasn’t terrible — it was his fourth consecutive game without an interception — but he wasn’t a catalyst, either.

“For me, for the whole team, it’s about hitting big plays when they’re there,” Darnold said. “We were dinking and dunking a lot of the game, which is fine. We just have to hit big plays. When the big plays are there to be made, we have to make them and I have to make the throws.”

There were some positives to build on. Darnold, who struggled with his short-area accuracy last season, posted a 68% completion rate. He was 20-for-26 when throwing to Crowder and Bell. They’re good for Darnold because they can get open quickly, providing him with easy completions. That will help the offense create an identity, which will help in the coming weeks. Clearly, the Jets have to integrate Anderson into the offense because he’s their only home run threat.

Darnold proved last season he has the mental toughness to handle adversity, so don’t expect him to hide in a corner. It shouldn’t be gloom and doom. His offensive line, which played together for the first time, will be more cohesive in Week 2. Darnold will be on a prime-time stage, ESPN’s Monday Night Football, with a chance to make everything right.

He’s been in this situation before, except this time it feels different.

OMG BECKY, LOOK AT HER BUTT – Microsoft’s Surface ‘Centaurus’ may be niche, but it’s definitely not doomed to fail…..

Drew Bledsoe on Brady, Barolos and life after the NFL