ALAMEDA, Calif. — You drafted Antonio Brown for your fantasy team, and after a roller-coaster summer he’s out with the Oakland Raiders before ever playing a game. 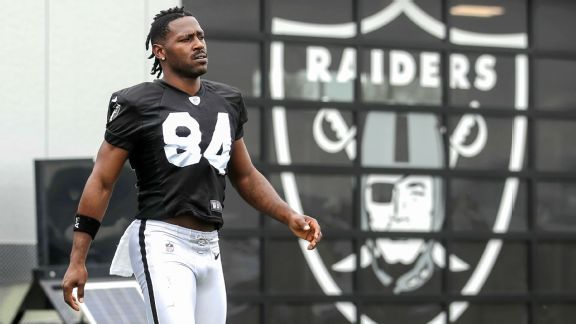 Steelers got best from Brown and moved on at the right time. Story

So what do you do now?

Throw in the game tape of the Raiders’ exhibition at Arizona and invest heavily in Josh Jacobs.

Yeah, I realize one is an uncoverable, if insufferable, wideout and the other is an untested rookie running back. But the Raiders have yet to use the game-breaking Brown in any kind of game situation and Jacobs ran wild in the preseason against the Cardinals.

Small sample size, I know, but on his first three carries Jacobs darted for 8 yards, dashed for 6 more and went with another cutback for a 6-yard pickup. Twenty yards on three attempts. Nice.

His vision is what impressed quarterback Derek Carr the most.

Matthew Berry explains why he’s so high on rookie RB Josh Jacobs and talks about how his history at QB can have an impact on the Raiders.

“I’m sitting back there playing ‘Madden,’ tell him to cut back and trying to run for him,” Carr said.

“I think the thing that rubbed off on me the most about Josh was his want-to. It wasn’t like, ‘Oh man, this is my first game.’ None of that. He was out there just trying to bully people. He was out there trying to run hard. He didn’t care that he’s a rookie. He’s trying to prove that he’s the best back in the NFL. That’s his mindset. Really impressed … with his demeanor and mentality.”

No, the Raiders won’t completely turn into a run-first team sans Brown, but they will need Jacobs to keep Denver Broncos edge rushers Von Miller and Bradley Chubb honest on Monday night. And if Raiders tackles Kolton Miller and Trent Brown can hold them at bay, look for tight end Darren Waller and receiver Tyrell Williams to share the targets initially intended for Brown.

Clay: My draft board | 13 breakouts

Then again, what if the Raiders decide to replace Brown by signing familiar face and “Hard Knocks” darling Keelan Doss off the Jacksonville Jaguars‘ roster? I kid. Kinda.

But have the Raiders already been preparing for the Broncos without Brown?

“Yeah, and we’ve been doing that,” coach Jon Gruden said Thursday. “Obviously, you’ve been at training camp, I think for the last four weeks we have been practicing without him and preparing to play no matter who’s injured. You have to adapt. Unfortunately, we had to adapt again today, but we’re really excited about our receiving corps.

“We’ve been going out to practice every day and we’ve adjusted without him. We never knew sometimes when he was going to practice, so we’re good at it. We’re good at adapting and adjusting, unfortunately. I’m going keep my fingers crossed and I’m just going to say to you, I’m really excited about the guys that we do have and we’ll do the best we can.”

RT @youthsnews: Men need to stop treating little boys getting raped by “hot” older women like a joke.: For context, I was watching this new…
16 hours ago

Men need to stop treating little boys getting raped by “hot” older women like a joke.: For context, I was watching… https://t.co/vCHkG8juWN
1 day ago